View the calendar for upcoming clinics

The Environmental Health Division is charged with the prevention of human cases of rabies in Chautauqua County. This includes promoting pet rabies vaccinations, investigating all potential rabies exposures (animal bites & scratches) that are reported to the Department, and submission of certain animal specimens to the NYS Department of Health Wadsworth Laboratory for rabies testing. In accordance with NYS Public Health Law, any person with knowledge of an animal bite is required to report these to the Health Department for investigation.

Rabies is a well known lethal disease that is easily spread to humans by the bite or scratch of an infected animal. It is endemic in certain wild mammal populations across New York State including primarily raccoons, bats, fox, and skunk.

The disease is caused by a virus which is transmitted through the saliva of an infected animal. Without swift and proper treatment the disease is always fatal. Once symptoms develop there are no effective treatments, making early identification and immediate treatment absolutely necessary.

Common symptoms of rabies are outlined below. It is important to note that rabid animals may not exhibit all or any of these symptoms. Symptoms may vary by species, by individual, and by how advanced the infection is.

In general, pets are far more likely to come in contact with rabid animals than people. Fortunately, an up to date rabies vaccination should protect your pets if they do become exposed to rabies. Dogs, cats and ferrets may all receive vaccinations after 12 weeks of age. Booster frequency depends on the species. Most farm animals may also be vaccinated against rabies. Contact your veterinarian for more information.

Rabies vaccination is required in NYS in order to license your dogs. In addition, it is a violation of the Sanitary Code of the Chautauqua County Health District to harbor or possess a dog, cat or ferret without a current vaccination. It is your legal responsibility to ensure that all of your dogs, cats, or ferrets are vaccinated.

The Environmental Health Division regularly conducts free rabies vaccination clinics for dogs, cats and domesticated ferrets in several locations across Chautauqua County. All Chautauqua County residents are eligible for these free vaccinations. Notices for these clinics will be posted on the Chautauqua County website, through radio and newspaper ads, as well as fliers posted on community boards around the County. You may also contact us to find out when and where the next clinic will be held.

How is a Rabies Exposure Identified?

Since the virus must travel through the infected animal's nerves, the onset time for the disease can vary greatly. Depending on where the initial introduction is made, it may take from a few weeks to several months to fully develop. During this time, there are no outward symptoms. Therefore, initially it is impossible to determine if an animal bite was an actual rabies virus exposure by the wound, or other medical testing.

In order to make that determination, observation of the animal that did the biting or scratching is necessary. A domestic animal (dog, cat, ferret & some farm animals) that is capable of transmitting rabies is always in the final stages of the disease and will die shortly afterwards. For these animals, this time frame is less than ten days. Therefore, when a person is bitten or scratched, you can be certain that the animal was not capable of transmitting rabies as long as the animal is still alive and healthy ten days after the incident. For non-domestic animals, this time frame may vary, so it may not be possible to determine rabies exposure without euthanization and laboratory testing.

Due to the severity of the disease, any bite from a rabies vector species animal must be treated as an actual exposure if the animal cannot be tested or positively identified and captured for observation. This is often the case with wild animals and strays.

Bats present special problems as far as determining rabies exposure. Since bats have very small and razor sharp teeth, people are not always aware that they have been bitten. Complicating the problem, it is common for residents to have bats enter their home through attic spaces, holes in flashing and other unanticipated entry points. When a bat gains access to sleeping quarters, it is possible that a sleeping person, or any people not capable of communicating that they were bitten (infants, etc.), may be exposed to rabies without their knowledge. Therefore it is important to capture any bats that are discovered inside the home so that they may be tested for the presence of the rabies virus. Recent human rabies deaths in the US were attributed to unreported bat bites.

If you find a bat in your home, capture it and notify us so that we can make testing arrangements. Captured bats should be placed in a freezer if they are found on a weekend or holiday. For instruction on how to capture a bat in your home, please see the video below, produced by the NYS Department of Health.

Most reported exposures involve domestic animals (dogs & cats) with owners. In these situations, we will contact the animal's owner and verify that the animal had a current rabies vaccination. Although rabies vaccinations offer good protection, it is not a 100% guarantee that the animal cannot contract rabies. Even if the animal has a current vaccination, confinement and observation of the animal for a period of ten days is still necessary to eliminate any possibility of a human exposure. Confinement means that the animal must be kept isolated from other animals and has limited exposure to humans. This can usually be accomplished at the owner's home. As long as the animal is still alive and healthy at the end of the ten day period, post-exposure rabies treatment will not be necessary.

In rare circumstances, animals involved in potential rabies exposures may die before the end of the confinement period. If this happens, there is no choice but to submit the animal for testing. This must be done, regardless of how the animal died. Without a full ten days for observation, there is no other way to know if the animal was rabid at the time of the potential exposure.

The information provided is to help inform veterinarians, medical personnel, and the public about the risks of rabies infections and the proper action that must be taken if a possible rabies exposure has occurred. 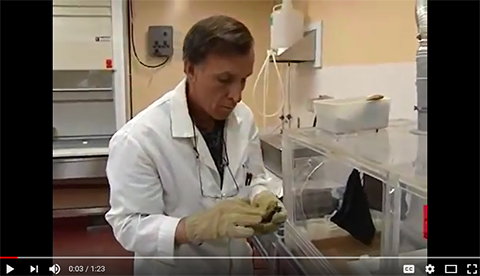 Rabies Laboratory at the Wadsworth Center